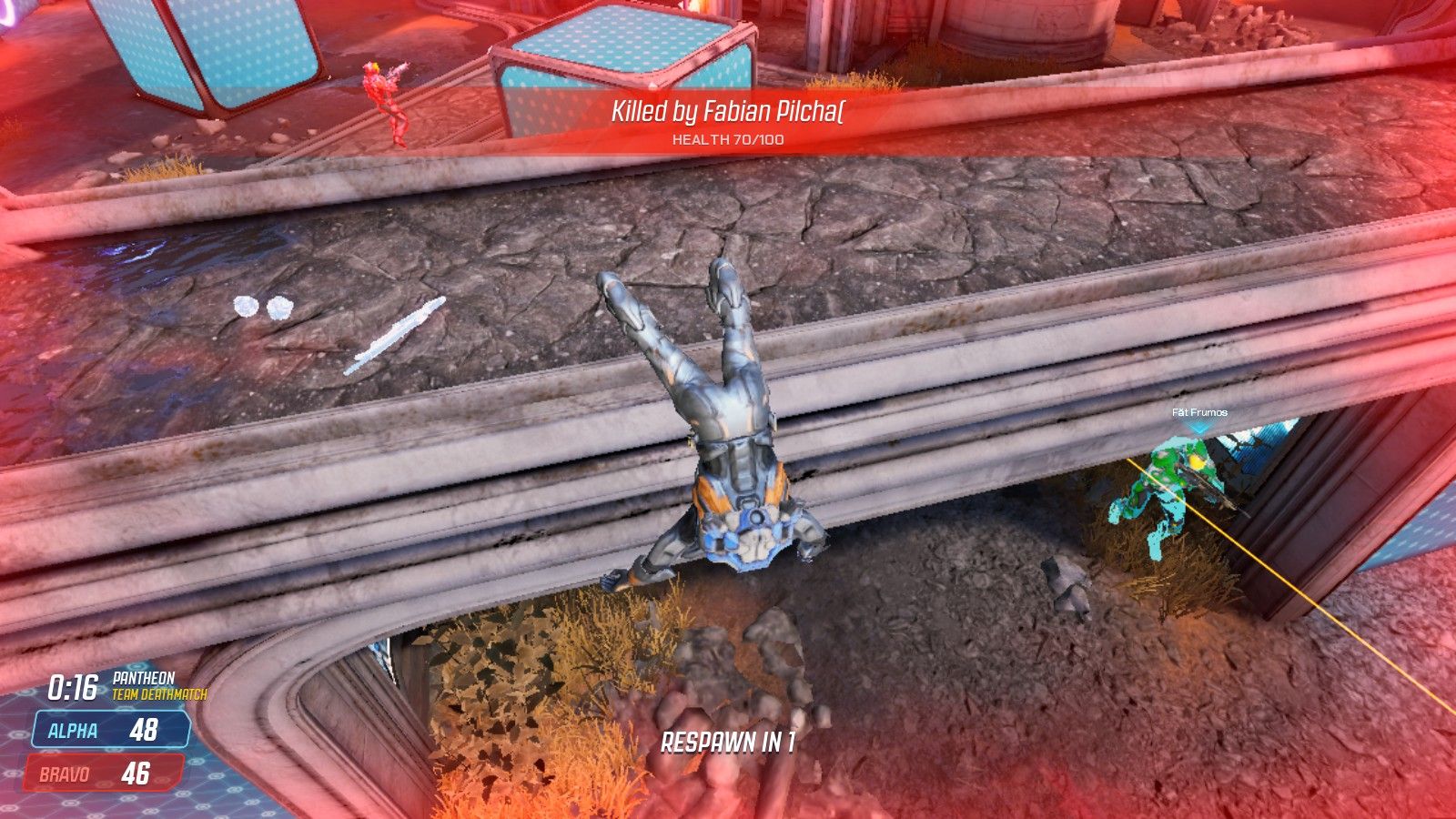 Review for Splitgate, a shooter where players can create portals, to defeat enemies in new, creative ways.

Splitgate is a free first-person shooter with portal mechanics available on Steam and consoles, it supports cross-play so you can play with friends on different platforms. There are multiple game modes and a competitive ranked scene.

The game is futuristic and introduces the portals along with its sci-fi aspects. The weapons are modern, but they keep a common feeling to them, with standard controls, similar to other FPS games, with a few exceptions.

Portals are shortcuts that players can create to travel through two different points on the map quickly.

You don't have to go through a portal though, you can see what is on the other side, and even shoot on a portal and your bullets will be sent from the other end.

Every player can create two portals, being one side and the other side of the portal, and close portals created by opponents using grenades.

Introduction to the game

Splitgate has an awesome tutorial at the start of the game.

The portal mechanics could be challenging to teach in a brief tutorial, but the game manages to do it without problem, a few steps to complete and you are done with the tutorial and already understand all the basics.

You can control the portals with Q and E, being able to change only one of both portals if you wish. There is a clear indication of when a portal has no end — as the player only used one portal — and that is a nice little addition that can greatly help new players.

Enemy portals are all red, so as a new player you have no trouble spotting them, and all enemies have a clear red highlight around them, you don't need eagle eyes to spot players through the map.

Grenades are the only thing that may be misleading for new players, but they are alright, they are used to destroy enemy portals, but that is not hard to understand and is covered by the tutorial.

It didn't take long for me to understand the game mechanics, so I'd say the tutorial is well done. When looking at gameplay footage you may think that the game is too complex, but it's not that hard to pick up.

Thinking with portals introduces a new dimension to the FPS genre.

You can, for example, create a recursion where you can camp yourself, effectively defending yourself while camping others at the same time.

Camping yourself on Splitgate is possible because you can place a portal at an angle that can watch the other side of the portal where you are standing at.

Although camping yourself is a silly example, you can get what I'm trying to say! You can do all sorts of crazy things while combining that with futuristic weapons.

You can choose a weapon before a match starts but the game has weapons available on the map, and there are other ways you can get them, so you can switch your playstyle during a match to adapt to different situations.

As a disclaimer, I did not play the game for hours and hours.

The gameplay is addicting and portals never get old, you can take a look at how many creative gameplay clips are there, and how great they are.

You have several factors that spice up your gameplay:

Splitgate has a well-done execution on its gameplay, it's an innovative arena-style shooter that will give you a unique experience.

Portals are a big feature, but they aren't everything going up for the game, the other points about Splitgame also surprise you with how fun they are.

In one of the game modes, for example, there is a ball that the opposing teams have to hold, one player holds the ball and can kill players with it, at melee range. So in this game mode, you end up with one of your teammates running around trying to protect the ball, and the enemy team is desperately trying to hunt your teammate down, as holding the ball gives your team points.

You also have maps where players try to set up evil portals, by creating portals that will lead unwarned enemies (or teammates) into falling to their death. You're not able to see where enemy portals lead, keep that in mind to avoid a trap.

I believe there isn't much I could say besides try it for yourself, as it's not easy to put its gameplay-feeling into words. Splitgate is totally recommended, it's a free great, and innovative shooter.

Are NFTs a scam?